Organized as part of Unity’s annual Unite event, VRrOOm on VRChat and Future Fest will broadcast the concert, with live graphics platform Volta providing VJ visuals for both virtual destinations. 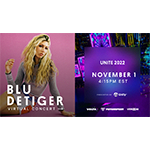 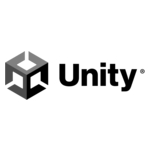 The Unite virtual concert is a simultaneous broadcast of a performance to multiple virtual Made With Unity (MWU) real-time 3D (RT3D) destinations. To achieve this, Unity has designed and will produce a multi-camera shoot of Blu with Xite Labs, which will be synced with VJ visuals from Unity live graphics platform Volta and simulcast to custom stages and digital billboards in virtual show platforms VRrOOm and Future Fest.

“Live Entertainment has gone through a seismic shift, and virtualized, augmented and interactive shows have become industry staples. Here, with Unite’s Virtual Concert, we have taken it a step further by designing a system for interoperable content that is essentially limitless – we can now simulcast live and on-demand performances into multiple virtual real-time 3D destinations, across platforms, to a global audience,” said Boo Wong, Director of Live Entertainment, Unity. “We are so excited to be forging this new intersection of games and entertainment with Blu, Xite Labs and Made with Unity platforms VRrOOm, Future Fest and Volta for this first of its kind, multi-destination virtual concert.”

VRrOOm is a company that specializes in producing interactive live entertainment experiences in social XR. Previous events include creating a concert in the digital twin of Notre Dame for Jean-Michel Jarre, as well as other DJ sets or festivals such as SXSW and activations for Roland-Garros surrounding the 2022 French Open. They are now building their own social VR platform dedicated to live entertainment.

“During the pandemic, we offered a whole new playground to artists. New ways to represent themselves through avatars, to interact with their audience, to have innovative staging and to reach fans all around the globe,” said Maud Clavier, Chief Operating Officer, VRrOOm. “Through fun, intimate and social experiences, surfing on technical constraints and the craziness the medium offers, we build shows in virtual reality platforms with a whole new level of interaction and creativity.”

“Distributing live broadcasts to multiple destinations will definitely become a standard in the future. Players have different preferences for how immersed they would want to be when they consume their content, so giving them options is the way to go,” said Steven Yang, CEO, Future Fest. “We’re thrilled to be part of such an amazing cohort because each of the platforms offer players such vastly different metaverse experiences.”

Volta is a self-serve XR creation platform powered by Unity. It has been used in numerous settings, both virtual and in real life. Some of the most notable examples in 2022 include live shows with artists such as Deadmau5, Nero, Machinedrum and most recently Iann Dior at Lolapalooza festival in Berlin. Volta was used to provide visuals at Glastonbury 2022, and was featured in Time Magazine’s 100 Best Inventions of 2021.

“We are really proud to be a part of this project. While this unique and creative use of Volta is really exciting, it is the ability for three emerging and innovative companies to easily and quickly combine very different but complementary tech stacks together into a cohesive experience that is the real accomplishment,” said Alex Kane, CEO, Volta. “Interoperability will increasingly provide incredible forms of creative expression and we couldn’t be happier to be helping pioneer it alongside Unity, Future Fest and VRrOOm.”

Bass prodigy and burgeoning pop icon Blu DeTiger was born and raised in NYC. Drawn to the bass early on, she took the stage at CBGB, prior to the iconic club’s closing, when she was only seven. By 17, she was a staple in the city’s creative scene. While playing in a multitude of bands, she also distinguished herself as a DJ, playing live bass during her sets and getting the crowd dancing, whether at a techno rave in Brooklyn or a high-profile fashion event. Blu attended NYU Tisch Clive Davis for two years. By early 2020, while also writing and producing her own music, Blu was cutting her teeth touring around the world with a variety of artists. Blu released her debut EP in 2020, and has since racked up over 120 million global streams to date.

The Unite Virtual Concert will create fun environments for Unite Attendees from around the world to connect and socialize. Attendees can enter Blu’s show as avatars on either of the two interactive event destinations they choose, or sit back and watch via livestream links.

Unite 2022 will be an exhilarating day of deep dives, breakout sessions, and so much more. On November 1, 2022, join fellow game developers and others from the Unity community online or in one of the five locations where local Unite events will be held (namely Austin, Brighton, Copenhagen, Montreal, and San Francisco) for a full day of inspiration, learning, and connecting.

Unity (NYSE: U) is the world’s leading platform for creating and operating real-time 3D (RT3D) content. Creators, ranging from game developers to artists, architects, automotive designers, filmmakers, and others, use Unity to make their imaginations come to life. Unity is the foundation upon which the world’s most powerful digital content is created. Specifically, Unity’s platform provides a comprehensive set of software solutions to create, run, and monetize interactive, real-time 2D and 3D content for mobile phones, tablets, PCs, consoles, and augmented and virtual reality devices. In the fourth quarter of 2021, Unity had, on average, 3.9 billion monthly active end users who consumed content created or operated with its solutions. The applications developed by these creators were downloaded, on average, five billion times per month in 2021. For more information, please visit www.unity.com.

Volta is a self-serve XR creation platform that gives artists & creators the ability to design and broadcast experiential content that goes beyond the 2D screen and reaches into the metaverse. Volta integrates seamlessly into artists’ existing workflows, allows them to build new immersive worlds that were previously unimaginable, and can even let their fans have an impact on the environment, turning a broadcast into a living breathing place. What once required a state of the art production studio and a six figure budget is now free. As a Techstars portfolio company, Volta XR is at the forefront of music technology development and since finishing the programme, has partnered up with Warner, Beatport, Boiler Room, Mixcloud and more to bring the next generation of music experiences to the global audience.

Futurefest is a two-day festival of immersive experiences, compelling performances and radical speakers, all designed to excite and challenge our perceptions of the future. The event is the flagship festival of Nesta, a global innovation foundation. It is a non-profit initiative aimed at bringing future thinking to the public realm so that everyone can benefit. To find out more visit https://www.futurefest.io/.

VRrOOm is a production company that currently specializes in building interactive concert experiences in VRChat. Attendees can join this show via VRChat PC Client or Quest devices. Previous events include creating a digital twin of Notre Dame for Jean Michele Jarre, as well as other DJ sets & activations for Roland-Garros surrounding the 2022 French Open. Their website can be found here.