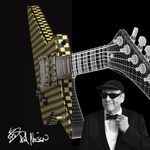 CHICAGO–(BUSINESS WIRE)–Rick Nielsen, famed guitarist of Cheap Trick and renowned guitar collector, has entered the digital collectibles world with the inaugural release of a series centered around his iconic black and white 1978 Checkerboard Hamer guitar. The guitar was first played and displayed on Cheap Trick’s platinum ‘Dream Police’ album and cover and has been seen and heard on thousands of stages around the world and at literally every Cheap Trick appearance since it was first built for Rick. It’s also been on MTV videos and award shows and, coming soon, as a gigantic checkerboard, metallic painted replica which will be a landmark of light, welcoming visitors to the new Hard Rock Casino in Rockford, Illinois. “When I was approached by the team at The Mothership about making a digital twin of my guitar, I thought, man, that sounds cool!” said Nielsen.

Rick partnered with technology company The Mothership Technologies to create and sell this series, which debuts December 15th at 4 PM EST, and will be the first of several planned. “We are honored to have the opportunity to partner with Rick on this project. Our focus is taking real-world objects of value and scarcity and authentically producing a digital twin; a three-dimensional version of the original with all features intact – scratches, dents and all. People want the history- not a pristine rendition,” said Scott Lawrence, CEO of The Mothership Technologies.

This unique collectible is a hologram delivered inside a special physical holographic picture frame developed by New York company The Looking Glass Factory. This is the perfect way to display and show off 3D collectibles.

Rick is one of the most prolific guitar collectors on the planet, with hundreds of amazing instruments. The goal of The Mothership Technologies is to curate, alongside Rick, a series of his favorites, and make more twins for people to own – because he’s not going to be selling the originals anytime soon! People can explore what becomes available December 15th on The Mothership Technologies’ marketplace called The Victory Collection (https://victorycollection.io).

Rick Nielsen was inducted into the Rock and Roll Hall of Fame with his band, Cheap Trick, in 2016.

“If Rick Nielsen wasn’t one of rock and roll’s most colorful and accomplished characters in real life, there’s no way to have dreamed him up. A homemade cartoon figure who is also a down-to-earth family man. A superlative guitarist who makes it look like a goof onstage. An inveterate joker whose best-known song is a sincere request for love. You think it’s all an image, a pose? Spend a few minutes with the man and you’ll find out just how wrong you are.

After more than four decades in the spotlight, Rick Nielsen’s accomplishments and enormous guitar collection could fill – in fact, have filled – a museum, and he’s still going strong. He has all the accolades of rock stardom, as well as a songbook that is deeply ingrained in the American rock psyche and the respect and admiration of fans and A-list musicians alike. He also has the infectious enthusiasm of a five-year-old hyped on chocolate bars. As a prescient first-grade teacher wrote on his report card, “He doesn’t seem to know when to keep quiet.”

Rick Nielsen makes the human connection as well as anyone in rock. He knows everybody, remembers nearly everything, and still has a fan’s enthusiasm for the music he loves.” -Ira Robbins

About The Mothership Technologies:

We are a passionate team of media-savvy veterans who have the benefit of decades of immersion in the dynamic world of digital media.

Our team came together because of a firm belief that the technology landscape is undergoing a massive shift. Spatial computing will change how we communicate, work, and play. Paying close attention to this evolution has allowed us to identify new experiences and unique value creation opportunities.

Spatial Computing is a convergence of technologies. It includes Augmented and Virtual Reality, Blockchain, Cryptocurrency, 5G networks, 3D printing, Synthetic Biology, as well as Edge, Mesh, and Fog computing. It’s an intense list – the scope of each technology is immense – so what’s our trajectory?