PALISADES PARK, N.J.–(BUSINESS WIRE)–#LaLiga—Artist Sisley-L conducting various activities that will lead the change of the era relating art industry and also beyond the level of art, having built her own world of an art on the global stage. 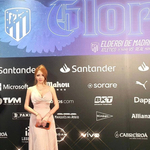 According to BLUE.HB LLC, an artist management company, Sisley-L has made her visit to La Liga headquarters in Madrid, Spain from September 17th to the 19th for a collaboration project. She was invited to the football match between Atlético (AT) Madrid and Real Madrid held in Madrid. After this VIP invitation to the match as the Vice President of the media production company TVM, she had three days of meeting with La Liga Asia General Manager Ivan Codina and the La Liga team.

During the meeting, they discussed how to improve the artistic aspects of La Liga and to sustain its brand value when they face consumer base expansion in line with the global era and contemplate expansion into various channels.

Sisley-L said, “The meeting was invaluable as I was able to visit the world-class sports organization, share insights about their brand values, and feel the passion for football.”

On the other hand, she showcases Queen Elizabeth’s portrait at the Portrait of the Era at Saatchi Gallery in London from October 12th to 16th. She pays tribute to the Queen in her way as an artist and her thought and emotion were clearly expressed in the artwork.

The portrait of the era exhibition was planned to commemorate the 70th anniversary of Queen Elizabeth’s succession to the throne. These artworks show respect for her devotion to the country, the people, and spotlight the beauty of its essence. Therefore, those Queen Elizabeth portrait collectors from all over the world attended this exhibition.

On the eve of the event, David Armstrong Jones, former chairman of the British auction house Christie’s, nephew of Queen Elizabeth II, and grandson of King George VI, presented to unveil the portrait work commemorating the 70th anniversary of the Queen’s accession (Platinum jubilee).

Sisley-L, Portrait of the Era series is a new series that reflects artists’ concerns about human nature. She captivates celebrities and influencers around the world and expresses their inner and essential values through her work. It is also the artist’s first launch of a workbook which has been highly requested.

Since 2006, Sisley-L has been exhibiting various works such as oil painting, acrylic, watercolor, drawing, sculpture, and digital art. They are valuable resources as they contain her various different projects showing the new way of her expression along with the trend through NFT, Metaverse and etc.