LONDON–(BUSINESS WIRE)–Today, The Coca-Cola Company unveiled its first-ever sample bottles made using recovered and recycled marine plastics, demonstrating that, one day, even ocean debris could be used in recycled packaging for food or drinks. 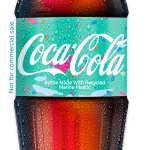 Through a partnership between Ioniqa Technologies, Indorama Ventures, Mares Circulares (Circular Seas) and The Coca-Cola Company, about 300 sample bottles were made using 25% recycled marine plastic1 retrieved from the Mediterranean Sea and beaches. The bottles were designed and developed to show the transformational potential of revolutionary enhanced recycling technologies, which can recycle previously used plastics of any quality back to high-quality plastic that can be used for food or beverage packaging. The sample bottle is the first-ever plastic bottle made using marine plastic that has been successfully recycled for food and drink packaging.

Enhanced recycling technologies use innovative processes that break down the components of plastic and strip out impurities in lower-grade recyclables so they can be rebuilt as good as new. This means that lower grade plastics often destined for incineration or landfill can now be given a new life. It also means more materials are available to make recycled content, reducing the amount of virgin PET needed from fossil fuels, and resulting in a lower carbon footprint.

The marine plastic bottle has been developed as proof of concept for what the technology may achieve in time. In the immediate term, enhanced recycling will be introduced at commercial scale using waste from existing recyclers, including previously unrecyclable plastics and lower-quality recyclables. From 2020, Coca-Cola plans to roll out this enhanced recycled content in some of its bottles.

Bruno van Gompel, Technical and Supply Chain Director, Coca-Cola in Western Europe, said: “Enhanced recycling technologies are enormously exciting, not just for us but for industry and society at large. They accelerate the prospect of a closed loop economy for plastic, which is why we are investing behind them. As these begin to scale, we will see all kinds of used plastics returned, as good as new, not just once but again and again, diverting waste streams from incineration and landfill.”

Tonnis Hooghoudt, CEO of Ioniqa Technologies, said: “The impact of enhanced recycling will be felt on a global scale: by working with Coca-Cola and Indorama to produce this bottle, we aim to show what this technology can deliver. Our new plant is now operational and we are bringing this technology to scale. In doing so, we aim to eliminate the concept of single-use plastic and plastic waste altogether.”

Yash Lohia, Chief Recycling Officer of Indorama’s Recycling Business Group and Board Member of Indorama Ventures, said: “By collaborating with new ventures in enhanced recycling technologies, we have the opportunity to reshape and redefine the future of plastic packaging, ensuring that nothing goes to waste. PET of any quality can now be recycled and upcycled, at the same time resulting in a lower carbon footprint for packaging.”

Van Gompel concluded: “This bottle is testament to what can be achieved, through partnership and investment in revolutionary new technologies. In bringing together partners from across our supply chain, from a community cleanup initiative in Spain and Portugal to an investment in technological innovation in the Netherlands, we have been able, for the first time, to bring damaged marine plastic back to food-grade material with which we can make new bottles.”

Coca-Cola has set out clear goals to work toward a World Without Waste, including that it will collect a bottle or can for every one it sells by 2030. To find out more about The Coca-Cola Company’s wider goals and actions on packaging waste, please visit: https://www.coca-colacompany.com/stories/world-without-waste.

Key partnerships in the development of the sample bottles containing recovered and recycled marine plastic:

About The Coca-Cola Company

Ioniqa is a clean-tech spinoff from the Eindhoven University of Technology (The Netherlands), specialized in creating value out of waste by using its proprietary circular technology. With a cost-effective process, Ioniqa is able to close the loop for plastics, starting with PET plastics. This award winning innovation transforms all types and colors of PET waste into valuable sources for ‘virgin-quality’ recycled PET. Up-cycling processes for other types of plastic are being researched and expected to be launched in the near future.

Indorama Ventures is headquartered in Bangkok, Thailand with global operating sites in:

Mares Circulares, partially funded by The Coca-Cola Foundation, is a collaboration between the Coca-Cola system in Iberia, Spain’s Ministry of Agriculture, Fisheries, Food & the Environment and three leading non-profit organizations — Chelonia Association, Ecomar Foundation and Vertidos Cero Association. The shared objective of the intervention scheme is to clean beaches and sea beds in Spain and Portugal, by collecting and recycling marine litter. The project also aims to raise awareness of responsible waste disposal to stop litter from arriving in natural spaces, as well as facilitate related scientific studies and a start-up to promote circular economy. Over 170 public and private organizations, such as local municipalities, NGOs, universities, and environmental and community associations, help make this happen.