A new video explains the science of exoplanets with a “star-studded” cast – see full release and video at https://universeunplugged.org/video/astrophysics-variety-hour.

PASADENA, Calif., March 29, 2022 /PRNewswire/ — How exactly do scientists find exoplanets—planets beyond our solar system—and can we ever hope to know anything about these far-flung alien worlds? These questions and more are answered in the Astrophysics Variety Hour, a new video hosted by actor Felicia Day and featuring celebrities that include singer-songwriter Rachel Bloom and actor Wil Wheaton.

In a series of segments that combine live acting with animation and music—including Bloom performing an original exoplanet-themed song—the Astrophysics Variety Hour explains in an accessible way how astronomers use the process of science to discover and analyze new worlds.

“The Astrophysics Variety Hour is a fantastic, educational romp,” said Day, who in addition to acting is a writer, and web series creator. “Some of what astronomers do is so esoteric it’s hard to grasp that they are all adventurers at heart. The way they discover things is mind-blowing, and being able to understand more about what they do is inspiring. I learned a lot myself by just hosting!”

The Astrophysics Variety Hour was produced by NASA’s Universe of Learning, a program that inspires and enables science learning by partnering scientists, educators, and experts in communication arts to create products and experiences based on NASA’s scientific discoveries. The video content was independently peer-reviewed by additional scientists and educators.

Exoplanets, Exoplanets, Exoplanets
Scientists hit a major milestone last week when NASA announced a new batch of exoplanets that pushed the grand total of known planets past 5,000. The Astrophysics Variety Hour’s segments introduce viewers to the main observational techniques scientists relied on to discover and study these oodles of exoplanets. Information from the observations helps scientists infer the likely climates and conditions on exoplanets.

One of the video segments conveys this concept by presenting a commercial for exoplanet tourism. The segment sends a camera-toting, wisecracking tourist to places like 55 Cancri e, a searing lava-covered world, and TRAPPIST-1d, a potentially habitable exoplanet that might be completely covered by ocean.

“Our goal was to explore the science in a way that is approachable and engaging,” said Tim Pyle, a multimedia producer at Caltech/IPAC and a member of NASA’s Universe of Learning collaboration. Pyle was the lead creator and co-director for the Astrophysics Variety Hour.

“I firmly believe the best way to share knowledge is by wrapping it in humor—that’s what I’ve done my whole career! So it was a dream job to work on this project, making exoplanet science fun and funny,” said Whitney Avalon, an actor, writer, and producer who brought her talents to the Astrophysics Variety Hour as a performer and co-director.

How Do We Know?
Alongside its exoplanetary antics, the Astrophysics Variety Hour helps viewers understand the process of science itself, which is critical to understanding how scientists can determine how the universe works. Host Felicia Day explains in a segment that through the process of observing, testing, and verifying, all people—and not just professional scientists—can critically assess information and make a statement based on evidence.

“Empowering people about science is incredibly important right now,” said Day. “Making science accessible means giving people confidence that they will benefit from embracing scientific thinking. We all use science every day—let’s call it out more!” 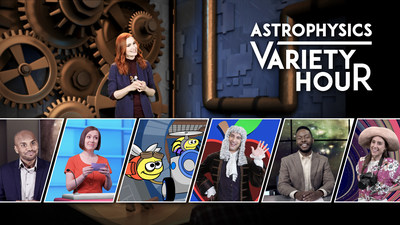