In KaraMeta, Karaoke lovers can sing to their hearts content in luxurious environments.

TAIPEI, Nov. 3, 2022 /PRNewswire/ — The latest virtual reality technologies have led to a total transformation in the gaming industry. Nowadays, players can discover a virtual world controlled by their body movement. Fun2 Studio, a game developer and Microsoft’s business partner in Taiwan, is going to redefine the gaming sector with advanced technologies and innovative content. Their upcoming game, KaraMeta, will be the best demonstration of how VR technologies enhance the entertainment industry. 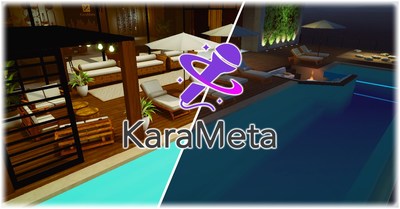 It is unquestionable the growth potential of augmented reality and virtual reality in the context of the global gaming market. According to Fortune Business Insights, the global virtual reality in the gaming market is projected to grow from $7.92 billion in 2021 to $53.44 billion in 2028 at a CAGR of 31.4% in the forecast period. Since virtual reality acted as a game changer improving user experience, there is an increasing number of start-up companies entering the gaming sector to build immersive 3D environments for players across the world.

Fun2 Studio, was established in 2019 by a few core team members from the XPEC VR team. With a passion for gaming, Ian Pan, the founder and CEO of Fun2 Studio, aims to make digital games more engaging with the latest immersive technology. “I am looking forward to VR and AR applications delivering unique experiences for players,” says Ian.

Unlike traditional games, which require players to be physically present in the same space, VR games encourage players to interact with each other via the internet. KaraMeta builds immersive 3D environments for karaoke lovers. It allows users to socially interact with others in the metaverse like singing with their friends in the real world.

Immersive technologies are revolutionizing the way people play games. It allows game developers to create realistic images along with sounds and other sensations to offer an imaginary setting to players. Ian believes that the core elements that make a game successful come from innovative content.

For example, their another work, “Raid on Taihoku”, a survival adventure game with the background of World War II in Taiwan, is a great success to bring a board game alive on the computer. Its PC version is released on Steam, and the VR version will be the next step. For the design of the Raid on Taihoku, Fun2 Studio teams up with experts to collect in-depth information about the history of Taiwan during the Japanese occupation. Through richly detailed game scenes and scenarios based on historical facts of Raid on Taipei, Raid on Taihoku takes players back to Taiwan in 1945. “Fun2 Studio hopes to make more people aware of this forgotten history and to remember the cruelty of war,” Ian says.

Because of the small market and limited capital in the gaming industry of Taiwan, Fun2 Studio, will have to target the global market in the future. Recently, Ian returned from a business trip to the Tokyo Game Show. Embracing the entrepreneurial spirit of Japanese game developers, Fun2 Studio is looking forward to establishing a deeper connection with the Japanese game industry. In addition, Ian observed the gaming industry in Eastern Europe has been on the rise in recent years. He is excited to have more partners and competitors from different parts of the globe, especially Poland and the Czech Republic.

The advantage of starting a business in Taiwan is the high level of acceptance of diverse cultures and innovative technologies, Ian highlights. On top of the strong hardware manufacturing capabilities in Taiwan, the policy support from the government has also provided a positive environment for XR start-ups. With solid software and hardware integration experience, Fun2 Studio, supported by National Development Council, aims to be the leading independent content developer in the gaming industry. “We believe in creating a Taiwanese IP so that players from all over the world can discover the culture of Taiwan through our games,” Ian expects.