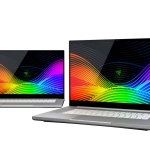 The Razer Blade Studio Edition laptops are anodized with a striking
Mercury White finish, equipped with 4K displays, upgraded to 32GB of RAM
and 1TB of NVMe storage, and loaded with NVIDIA’s Studio Drivers
optimized for performance with creative applications.

Creatives familiar with working on a traditional desktop PC can connect
a Razer Blade Studio Edition laptop to the Razer Core X external
graphics accessory to create a desktop-class experience on a mobile
laptop. With support for desktop PCIe graphic cards like the NVIDIA
Quadro RTX and GeForce RTX GPUs, Razer Core X can greatly accelerate the
work flow and reduce lengthy rendering times. Applications allowing for
dual-GPU rendering will enable users to put both the internal laptop and
external desktop graphics to work to provide even better performance.

Razer has a history of supporting the creative community, launching
Razer Music in 2016 which provided artists with a powerful but portable
solution for music production. In 2018, Razer launched the
#MadeWithBlade campaign to expand their support of artists beyond music
and into game development, visual effects, and more.

“The combination of NVIDIA Quadro and GeForce RTX GPUs with Razer’s
sleek design and up to 4K display make for an excellent laptop for
content creation,” said Jason Paul, general manager of GeForce software
and technology at NVIDIA. “The ray tracing, AI, and 6K+ video prowess of
the Razer Blade RTX Studio laptops will free artists from their desks
and allow them to create amazing art from anywhere.”

#MadeWithBlade continues to grow and currently features artists such as
Murda Beatz, Sonny Digital, and the ODESZA Live Visual team, with many
more to come. More information on #MadeWithBlade can be found here.

Studio Edition Blades will be made available later this year. Official
pricing and availability to be announced at a later date. For more
information head to razer.com/studio.

Razer™ is the world’s leading lifestyle brand for gamers.

The triple-headed snake trademark of Razer is one of the most recognized
logos in the global gaming and esports communities. With a fan base that
spans every continent, the company has designed and built the world’s
largest gamer-focused ecosystem of hardware, software, and services.

In services, Razer Gold is one of the world’s largest virtual credit
services for gamers, and Razer Pay is the e-wallet designed for youth
and millennials.

Founded in 2005 and dual-headquartered in San Francisco and Singapore,
Razer has 18 offices worldwide and is recognized as the leading brand
for gamers in the USA, Europe, and China. Razer is listed on the Hong
Kong Stock Exchange (Stock Code: 1337).

Razer – For Gamers. By Gamers.™