LOS ANGELES, Feb. 17, 2022 /PRNewswire/ — 360 VUZ, the immersive video mobile app, announced today opening its new office in Hollywood, Los Angeles US expanding its presence to a city best known for being home to the entertainment industry.

360 VUZ new office in Hollywood is set to scale up its businesses and support the entertainment industry by partnering strategically with top media and entertainment entities, and with famous content creators in the US that have fans internationally all over the world. Located within 2 miles radius from Warner Bros Studios, Walt Disney Hollywood Studios, and Universal Studios, 360 VUZ office strategic location will support the platform’s status as a leading mobile app and escalate its business plan in the future building on the Metaverse.

360 VUZ has renovated a former Walt Disney Animation studio into a fabulous immersive workspace and is building a team of superstars who admire the intersection of technology, media, and entertainment while having the strategic advisor joining; Sandy Climan who is known in Hollywood for being the Founder and President of Entertainment Media Ventures, a Los Angeles-based strategic advisory, and media investment company.

Khaled Zaatarah, 360 VUZ Founder and Chief Executive Officer said: “Hollywood is the land of dreams and is definitely the right place to expand our business as it is the hub for media and the entertainment industry. With the new Hollywood office, we are looking forward to growing our premium content and user base, and continuing in being the leading Immersive Platform in the world, supporting the entertainment community and creators.”

360 VUZ app has witnessed a great demand on content generated from Hollywood such as exclusive immersive videos featuring the Oscars, Golden Globes, movie premiers since 2015, and other sports and mega-events that made it host the largest immersive media library in the world, building on the Metaverse. 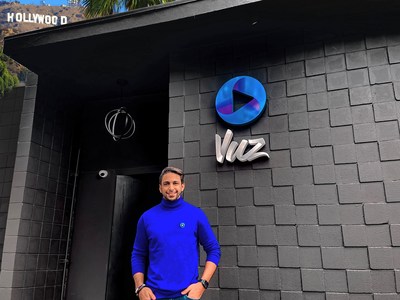